Here is my attempt at this challenge as set by Cassmob


My first ancestor to arrive in Australia was: James Lefroy from Cork arrived on the 6 September 1832, aged 28 years. James was tried in Co Mayo for stealing a watch. A jockey and coachman by trade, he was sentenced to 7 years and sent to Port Jackson aboard the ship "Eliza".
Note: the latest arrival was 1862, so within a 30 year period, my ancestors were all settled in Australia
I have Australian Royalty (tell us who, how many): I have 6 convicts in my direct family line, 3 males who partnered and married 3 female convicts. James Lefroy married Olive King in Sydney; Fanny Norman married Henry Nicholls in Hobart; John Roberts married Sophia Lawrence  in Maitland, NSW
I’m an Aussie mongrel, my ancestors came to Oz from: Mainly England, then Ireland with a few Scottish and two Welsh thrown in. I have absolutely no idea of where my 3x Great Grandfather Owen Smith came from. 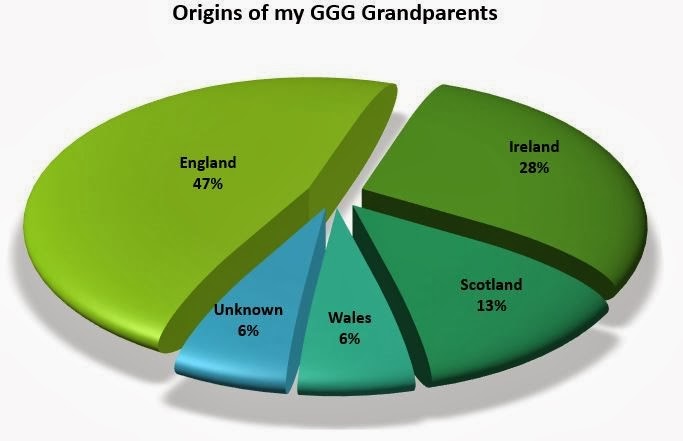 Did any of your ancestors arrive under their own financial steam? Some came as convicts, some as Bounty immigrants, some as assisted passengers and only a couple came as unassisted passengers, while some swam.
Note: My GG Grandmother, Agnes Jane Johnson, was keen to note her occupation on her marriage certificate as “Free settler’s daughter”
How many ancestors came as singles? 14
How many came as couples? None as far as I can tell
How many came as family groups? 5, one woman came with her 5 children after her husband had died, the other couples had between 2 and 6 children with them
NOTE:  For the above 3 questions, these are only figures for the people I can account for - as many swam, I am unsure if they had the support of a spouse or family
Did one person lead the way and others follow? I  do know that GGG Grandfather, Michael Dillon sponsored his brother Patrick who arrived in 1855.
What’s the longest journey they took to get here? As Ralf McTell says:
“It's a long way from Clare to here
It's a long, long way
It gets further by the day
It's a long, long way from Clare to here”
Did anyone make a two-step emigration via another place? Not that I am aware of.
Which state(s)/colony did your ancestors arrive? 16 arrived in NSW; 2 were sent to Van Diemen’s Land, and 3 landed in Moreton Bay in Queensland, but all very quickly settled in NSW. Unsure of others as I am yet to find their arrivals.
Did they settle and remain in one state/colony? Yes, New South Wales
Did they stay in one town or move around? My father’s family all settled in the New England Tablelands and many are still there, while my maternal line nearly all settled around the Hunter district, before moving to Sydney, while a few stayed in Sydney from the time of their arrival
Do you have any First Australians in your tree? Only by marriage. My cousin married an indigenous boy whom she went to school with. He went on to captain Australia in our Rugby Union team, the Wallabies, but their children would be my 1st cousins once removed. The mother of the husband of my father’s aunt, Susan Hill, was also an indigenous woman, so his cousins would be of aboriginal descent
Were any self-employed? My Morgan forebears, who came from Wales were skilled iron Moulders. After settling in Wallsend, near Newcastle (NSW), they set up a foundry business that seemed to do quite well. It is an area I need to research in more depth.
What occupations or industries did your earliest ancestors work in? Drayman, Painter and decorator, Coachman and Jockey, Iron moulders and miners, “Man of Wars Man” i.e., a Royal Navy steward, Tobacco twisters, then lots of farm labourers.
Does anyone in the family still follow that occupation? Most of the occupations that employed my ancestors no longer exist. There were two exceptions; my father’s cousin was one of the few descendants to stay on the land; taking up part of the original station, “Booroolong”, near Armidale until his death in 2005. The family had effectively worked on this station continuously from around 1850. My Roberts family also worked in the tobacco industry in its many forms from the 1840’s until the mid 1970’s.
Did any of your ancestors leave Australia and go “home”? Not really, though I do wonder what happened to the convict Henry Nicholls who had a wife and children back in Canterbury, England. He disappears soon after his last child is born in NSW, and I can find no record of him dying in Australia.
The brother of my Great Grandfather, though born in Australia, went to live in England when he was a young man, dying in Surrey in 1971.

NOW IT'S ALL ABOUT YOU
What’s your State of Origin? New South Wales - C'arn the Mighty Blues and Glory, Glory to South Sydney..
Do you still live there? No, but I still feel like a Sydney girl, actually I still call myself a Malabar girl; the suburb I grew up in – the area is ingrained in my soul – my true home is the landscape beneath the new homes, the rocks and cliffs and surrounding ocean.


Where was your favourite Aussie holiday place as a child? We didn't have many family holidays, as we didn't have a car until I was about 10 years old. Then Dad liked to travel to his home town of Glen Innes and surrounds.I preferred to stay home over the summer holidays to be near the beach and my friends. I liked the beach and there were too many trees in the country!
Any special place you like to holiday now? Each year I like to travel to the Central Coast of NSW to attend my Roberts’ family reunion. We always stay at the same holiday house at Forresters Beach.

Share your favourite spot in Oz: Any beach, with golden sand, warm water, preferably with surf with lots of sunshine and no or only a few people:
Any great Aussie adventure you've had? Travelling to Katherine in the NT with my husband who had to work there a few weeks after the flood in 1998. The whole experience was surreal but amazing. After his month of work was finished, we spent another couple of weeks exploring Kakadu and other amazing places in the Northern Territory, even though it was still technically the wet season.

What’s on your Australian holiday bucket list? Broome and the Kimberley coast; A trip around NSW visiting and retracing places my family lived – especially in the New England Tablelands – I had planned to do this last year, but health issues prevented us. I can only hope that my husband becomes able to tolerate travelling distances once again.

How do you celebrate Australia Day? Now, it’s really just another day, so nothing special. I have never been particularly nationalistic in my outlook or behaviour. Many years ago all of hubby’s aunts and cousins and their children would come to our place for a BBQ, but now the aunts have passed away and the children grown, and the cousins more dispersed

I am glad I finished this geneameme; it has taken some time and was quite difficult, but it showed just how much I don't know about so many of my direct ancestors - so thanks Pauleen, I really do have quite a bit of work ahead of me!
Posted by Unknown at 11:54 PM